Once upon a time on a family holiday to the Highlands I hiked up Ben Lawers with Dad – we went up the normal route from the National Trust for Scotland car park – a route which has the unfortunate reputation for being crowded in the summer months – to stand on the highest point in Tayside and the highest peak in the country south of Ben Nevis. As I recall there were a fair few tourists heading up the hill but despite that it was still a good day out.

One of the reasons this route is popular is the fact that the start point is almost 500 metres above sea level and leaves an ascent completely free of difficulty to the summit which at 1214m or 3984ft would be a much longer undertaking – if still an easy one – from the shores of Loch Tay.

So it was that after a drive in the rain stopping off to see the Falls of Dochart in Killin; there are some things that are better in this weather – I arrived at the infamous visitor centre which turned out not to be there. Apparently the building was demolished a few years back and the site returned to the wild. There is still a car park – on the other side of the road – and information about the area but if you’re after a coffee it’s back into Killin! Personally I think it’s better now as I remember the old place being very busy. Anyway – it’s is on the mountain road between Loch Tay and the Bridge of Balgie over the hill in isolated Glen Lyon. With the weather as it was there was no sign of any crowds today, and the rain had stopped so I prepared to set off. Two footpaths are signposted from here; one to Ben Lawers and another to Meall nan Tarmachan – the start of the 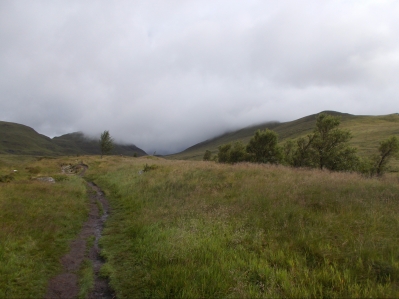 The early part of the route on the Edramucky Trail

Tarmachan Ridge route which I’ll do next time if we get some good weather up here.

The route I followed is initially through the nature reserve on a path known as the Edramucky Trail where can be seen a wide range of arctic alpine type flora and fauna which thrives in this area protected from deer and grazing sheep. The trees too are returning and I was amazed to see trees at around 2000 feet above sea level this far north – a height level with the highest parts of Dartmoor or the Peak District.

The route from the nature reserve – far from being crowded – was extremely enjoyable and is clearly marked all the way to the summit. In fact I had planned a more varied route involving Beinn Ghlas and Meall Corranaich but as the weather made a return in the form of heavy showers and hill fog, I opted to remain on the main path. Beyond the wooded area, the path climbs past some old shepherds’ huts known as shielings and turns sharply to the left up the grassy valley of Coire Odhar. At this point the path via Beinn Ghlas carries straight on but I followed the broad trail to the bealach or col at the head of Coire Odhar which is at about 850 metres.

Meall nan Tarmachan while you could still see it

The col is in a fine position with the path heading through towards the Glen Lyon side and the summit route continuing its steady climb to the right without losing much height. I had wanted to head up the nearby Munro, Meall Corranaich which rises on the other (western) side of the col on my return to this point though this was not to happen due to the deteriorating weather. The far side was sheltered from the wind for a while but the rain now came down again and mist obscured the summit ahead. This section of path though is remarkably easy following the contours of the hill in a gentle ascent to about 1000 metres re crossing the main ridge of the Ben Lawers group this time overlooking Loch Tay – or would have done if you could see it. 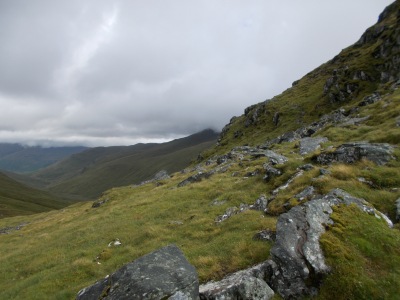 The col at the head of Coire Odhar

Here one rejoins the route coming over Beinn Ghlas which is the one we followed that first time in these hills and begins the final climb up to Ben Lawers. Again the route is nowhere difficult but this is the first part that seems like hard work as the path climbs steeply up the final slopes which today were battered by Westerly gales bringing rain and increasing cold as height was gained. The Met Office website had informed me to expect temperatures of 3 or 4 Celsius at this altitude with windchill down to -4 which is just twenty five for those of you on the other scale. Bearing in mind that it was late July, it just goes to show the value of being prepared in the Highlands! I have seen it snow in August at this height in the Cairngorms and but it felt much colder today on Ben Lawers.

A short rest on the summit with lunch behind the cairn and sheltered from the wind was a welcome relief from the wind and rain but it was not a place to linger today so I was soon heading back down the way I had come to the warmer climes below. The short film below gives some idea of the conditions encountered on this walk – perhaps the day was better suited to looking at the region’s waterfalls. And here’s part 2 of the trip…

Hi I'm Pete and I'm a UK based outdoor enthusiast, part time writer and photographer. My work includes action adventure novel The Colonel of Krasnoyarsk as well as a couple of travel stories recounting firstly a campervan adventure around New Zealand and then a week on foot in the Swiss Alps, hiking from the Eiger to the Matterhorn. The subject of these pages is predominantly hiking in the English Lake District (which is near where I live), North Wales and the Scottish Highlands as well as cycling; from rides with the kids to trail riding in the Highlands of Scotland and other wonderful places... Thanks for visiting.
View all posts by Pete Buckley →
This entry was posted in biking, Hiking, Scotland, Uncategorized and tagged biking, cycling, hiking, outdoors, Scotland, Scottish Highlands, travel. Bookmark the permalink.