The Last Snow of Winter

Towatds the end of March of this year, I headed over the fells above Whinlatter Forest near Keswick just as dramatic skies raced in from the North West and brought the last snow of winter to the mountains of the Lake District. We’ve had snow since – notably when I was camping with the family in mid Wales – but in the way of British weather, that was in spring though it didn’t much feel like it!

My plan had been to head to the fells above Buttermere but the snow had closed the Newlands Road that morning and I opted for a shorter walk from the far side of Whinlatter instead. With blizzards sweeping the hills through the earlier part of the day it was probably just as well.

This was an easy walk of about 9 miles that visited 4 of Wainwright’s hills; Lord’s Seat, Broom Fell, Greystones and Barf and provided some beautiful views that were given a touch of the dramatic by the atmospheric conditions. This is what weather forecasters refer to when they talk about snow on high ground.

The Loweswater Fells appear dramatic in the snow showers. This was the region I was originally bound for. 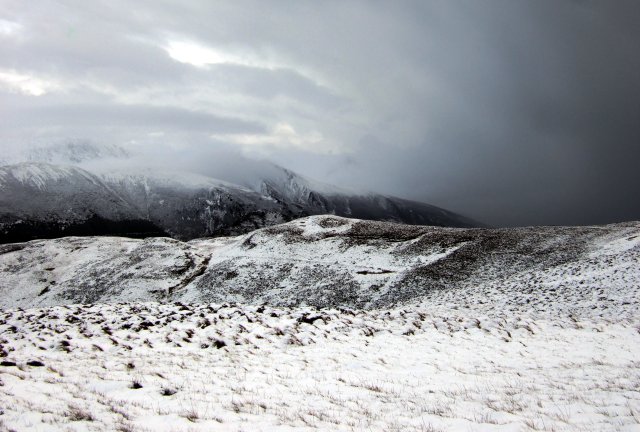 Looking towards Skiddaw. The threatening skies were never far away but only once did I ned to take shelter.

In the clear spells the views extended across the snow free lowlands of West Cumbria to the Solway Firth and Scotland.

Skiddaw appeared of Alpine proportions from the mists across the valley of Bassenthwaite. Bassenthwaite Lake itself is unseen behind the hill called Barf in the foreground.

What a difference a few hours makes – Lord’s Seat seen at the end of the day from the Darling How track where I had started the walk that morning in snow and grey cloud. It was now positively spring-like!

Hi I'm Pete and I'm a UK based outdoor enthusiast, part time writer and photographer. My work includes action adventure novel The Colonel of Krasnoyarsk as well as a couple of travel stories recounting firstly a campervan adventure around New Zealand and then a week on foot in the Swiss Alps, hiking from the Eiger to the Matterhorn. The subject of these pages is predominantly hiking in the English Lake District (which is near where I live), North Wales and the Scottish Highlands as well as cycling; from rides with the kids to trail riding in the Highlands of Scotland and other wonderful places... Thanks for visiting.
View all posts by Pete Buckley →
This entry was posted in Lake District and tagged Cumbria, hiking, lake district, landscapes, mountains, nature, outdoors, photography, snow, travel, weather, writing. Bookmark the permalink.

10 Responses to The Last Snow of Winter