Winter Landscapes of the Lake District

The slope stretched interminably away up in front of me. Distance was deceptive and I as paused at a rock protruding through the snow it became apparent that it was much further from the ridge above than it had appeared to be from below. My uphill progress was an effort; a step forward, sinking knee or thigh deep into the soft snow then having to extricate oneself only to repeat the whole process again. It was easier than in the valley though where there were streams running beneath the snow that remained invisible until you broke through their white camoflage and had to leap from the hole before the icy water penetrated boots and gaiters.

Challenging was the word I sought, but I was inspired to be here as I looked around at the white mountain tops like sugar icing across the valley I had just left and the sparkle of the countless snow crystals where the sun shone on the slope ahead. The mountains west of Keswick were now in sight across the white expanse around Calfhow Pike; I was getting higher but the ridge still seemed an age away…

Looking back to Clough Head and Blencathra from the snow slope

I had set out from High Row near Dockray in the north eastern corner of the Lake District, for Great Dodd which along with Clough Head marks the northern end of the Helvellyn Range. The route – for anyone who cares to repeat it – lay along the track known as the Old Coach Road which links Dockray with St Johns in the Vale, for 4km or two and a quarter miles before branching left up a vague boggy path which today was hidden under the snow. It is signposted to Calfhow Pike and follows the river of Mosedale Beck though after my encounters with several lesser streams beneath the snow I opted instead to head straight up the slope on the left to the cairn on Randerside.

Looking east from just below the summit with the Pennines on the horizon. Ullwater lies beneath the mist in the valley below 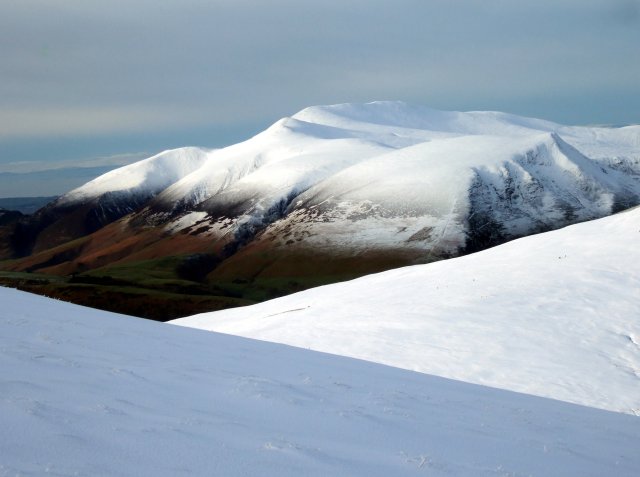 From here I would follow the wide ridge to the summit of Great Dodd at 856m or 2809 feet; a variation on my original plan to first ascend Clough Head (726m/2382ft) from the highest point of the track and follow the ridge around but it is January and it gets dark early here and the effort of walking in 40-60 cm of snow tends to slow the pace somewhat.

The view from the summit is always worth coming up for and today it was more than ample reward for the extra effort walking through the snow. Skiddaw and Blencathra to the North took on an alpine quality in their snowy garb while in the other direction the wide ridge – itself one of Lakeland’s great walks – stretched away towards the icy peak of Helvellyn in the South. A thin haze had spread into the west heralding more snow to come and this gave the western peaks a monochrome gloomy air but east across the Eden Valley a temperature inversion obscured the lowlands beneath a layer of cloud and fog and the eye was drawn to the Pennines around Cross Fell – their highest point – which seemed to float on the mist like distant islands on a calm sea. 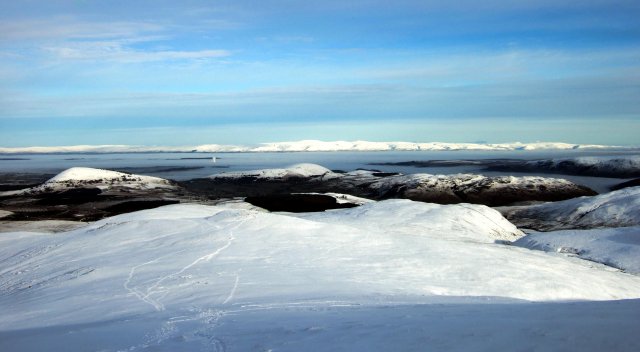 I admired the view all around until the cold began to penetrate my jacket and it was time to go. For a shorter way back I followed the tracks north east down the wide ridge back to join the Old Coach Road much nearer to its start point and where it is signposted for Great Dodd.

Hi I'm Pete and I'm a UK based outdoor enthusiast, part time writer and photographer. My work includes action adventure novel The Colonel of Krasnoyarsk as well as a couple of travel stories recounting firstly a campervan adventure around New Zealand and then a week on foot in the Swiss Alps, hiking from the Eiger to the Matterhorn. The subject of these pages is predominantly hiking in the English Lake District (which is near where I live), North Wales and the Scottish Highlands as well as cycling; from rides with the kids to trail riding in the Highlands of Scotland and other wonderful places... Thanks for visiting.
View all posts by Pete Buckley →
This entry was posted in Lake District and tagged England, hiking, mountains, nature, outdoors, photography, random, travel, writing. Bookmark the permalink.

12 Responses to Winter Landscapes of the Lake District